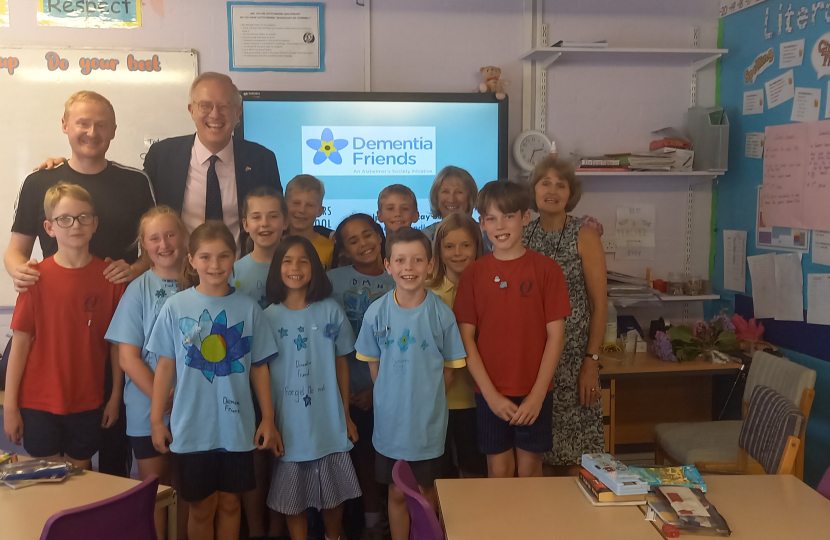 John Baron MP, at the invitation of Maureen Lee, Billericay Dementia Action Alliance Chair, has visited Quilters Junior School in Billericay. Maureen wanted to show John what the School Council have been doing to promote Dementia awareness. The School has recently achieved an Essex healthy schools best practice award for their intergenerational and dementia focused work.

John was informed of the Pen Pal scheme which operates at the school for older people in the community and they also hold afternoon tea events where the Pen Pals have been invited.

"I congratulate Quilters Junior School and Maureen Lee for reaching out into the community and helping people with dementia as well as creating awareness. Their Pen Pal scheme brings comfort to a lot of older people. This is compassion in action and the whole team at the school deserves our support and praise.”

“The School Council members were delighted that our MP, Mr. John Baron could visit them at school.  The children prepared and rehearsed a presentation for Mr. Baron to share highlights of their year in the School Council,  in particular the school’s Pen Pal scheme (there are nearly 80 older Pen Pals and each child in the school regularly writes to one of them) and their own very busy Dementia Action and Awareness Week.  The children have worked extremely hard all year and came up with all the ideas - we are very proud of them.  They are role models - good citizens who are leading the way in the community in promoting understanding of dementia and showing empathy and understanding to those living with dementia and their families.”

Photo shows John with Headteacher, Michael Wade, and pupils and staff at the school.